Tejas to release in Cinemas Next Dussehra on 5th October 2022

Ever since Ronnie Screwvala’s RSVP  has announced their forthcoming film, ‘Tejas’ starring Kangana Ranaut as Air Force pilot Tejas Gill, the movie has been creating waves all over. 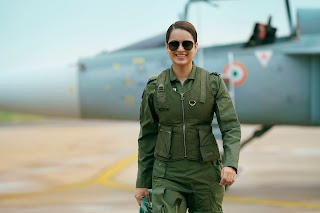 Honouring our brave hearts in the armed forces, team Tejas announced that the film will be releasing in theatres next Dussehra on 5th October 2022.

The story is meant to inspire and make one feel proud of our brave soldiers as they face a number of challenges to keep our country safe.

Written and directed by Sarvesh Mewara, starring Kangana Ranaut as Tejas, the film is RSVP’s second Indian Armed Forces film post Uri: The Surgical Strike, to applaud the forces and inspire the country at large. The film is slated to release theatrically next Dussehra on 5th October 2022.