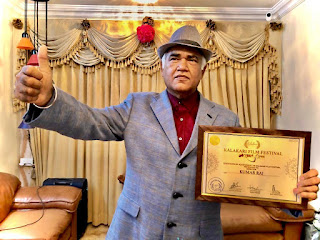 The festival  Cuckoo international film Awards features &  selects top films from the world’s filmmakers as well as introduces new talent from around the world. Producer-Director  Kumar Raj is well known in the Bollywood film industry for his feature films such as 'Yahan Ameena Bikti Hai' and 'Tara, the Journey of Love and Passion' which were selected for the 'Best Film Foreign Language category at the Academy Awards at Oscars. The film director Kumar Raj is euphoric with the ramifications of audiences Pan India as well as internationally. He said It was a very prideful moment for him to achieve this feat.

Kumar Raj is a Master Mariner in Shipping & has studied at Cambridge UK  & is a Shipping Captain by profession and Film Producer and Director by Passion. He has completed a diploma in production from ZIMA (Zee Institute of Media Arts).

For his extreme passion and love for cinema, he has produced five feature films that have been appreciated for their exceptional performances.

As said by Kumar Raj, “I am very proud of my Tara team and very happy to receive one more award for our teamwork. My team has worked very hard to make our film a super success and I am proud of the same.”

As stated by Rekha Rana, “I am very happy and excited about winning another award for ‘Tara’. This movie is very close to my heart and I am happy that a movie on women empowerment is really empowering women all over the World! God is good and I accept this award as another blessing from him.”

Even the previous elevated projects have won prodigious awards and appreciations, also got the attention of the Oscars for 'The Best Film Foreign Language' category.

Kumar Raj has Produced & Directed his next feature film Ameena starring Rekha Rana which will be released soon.